Flames is a track that showcases Sia’s powerful vocals on lead, which is enhanced by DJ/producer David Guetta! Her compelling voice and Guetta’s craft. 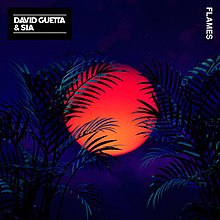 The two are reuniting for a collaboration entitled “Flames,” out now on digital service providers!

Flames is a track that showcases Sia’s powerful vocals on lead, which is enhanced by DJ/producer David Guetta! Her compelling voice and Guetta’s craft in sound create a beautiful pop ballad! It’s set to be another smash, like their very popular song “Titanium” which was released years ago and received 770 million streams on YouTube alone. In Guetta’s words, ““‘Titanium’ is still one of the tracks I am proudest of and Sia is one of my favorite artists to work with. She’s a great songwriter and has an amazing voice. I’m just super excited that we get to release another track together.”

So what are you waiting for? Grab a listen to “Flames” right now! https://davidguetta.lnk.to/flames

And of course, right after, let us know how you feel about the song!