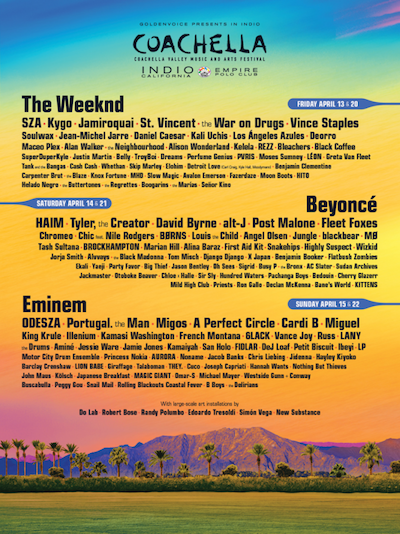 California’s leading music festival Coachella has just announced their 2018 lineup and you can bet that we’re drooling for those tickets! It’s a definite must to be there!

The first day and fourth day, happening on April 13 and 20, has The Weeknd as their headliner and includes Kygo, St. Vincent the War on Drugs, and Vince Staples to name a few.

The second and fifth day, on April 14 and 21, is my favorite by far because Beyonce will be there! Along with Beyonce, HAIM, Tyler, the Creator, alt-J, Post Malone, and so many other incredible artists are performing!

And I’m sure you’re guaranteed to be booking your tickets once you know that Eminem is performing on the third and sixth day! That’s on April 15 and 22! Along with him will be Portugal. The Man, Cardi B, Miguel, French Montana, Vance Joy, LANY, and the list goes on and on!

If you want to see the entire lineup, check out Coachella’s website! www.coachella.com

Then, let us know if you’ve been to Coachella before! And if you have, what year!

Audio Obscura will be at Vujaday Music Festival