It’s all about electronic music as well, bringing together some of the industry’s finest like Audiofly,NAME Festival, short for North Art Electronic Musique

For the past few months, we’ve been talking about summer, but unfortunately, that season is coming to a close! However, even though we’re saying goodbye to sunny days, it does not mean we’re eliminating the party scene as a whole! You’ll be surprised with what the month of October has to offer!

NAME Festival, short for North Art Electronic Musique, is a festival created back in 2005 to exhibit the beauty of Lille! It’s reached success for more than a decade, becoming one of the country’s most respected celebrations!

Ellen Allien is known as the “godmother” of NAME, performing at every edition! This year, Agents of Time, David Asko, Mano the Tough, Paula Temple, and Tale of Us are among the other names that will be there!

This year, NAME Festival is happening from the 5th to the 7th of October at Roubaix, Lille! Visit their Facebook event to confirm that you’re going! https://www.facebook.com/events/155745211747582/

In addition, watch this teaser to know a little bit more about the celebration! https://www.facebook.com/NAMEfestival/videos/1798578780187970/

Because NAME Festival has been running for a total of 13 years, let us know if you’ve ever attended any of them before!

If the French festival scene isn’t for you, it might catch your interest to go to Spain!

From October 5-7, Fort Festival 2018 is happening at Tossa de Mar, Spain. It’s all about electronic music as well, bringing together some of the industry’s finest like Audiofly, Jeff Mills, Maceo Plex, Mano Le Tough, and Undo! Check out their website for the entire lineup! http://fortfestival.es/en/en-fort-festival-tossa-de-mar/

What makes Fort Festival special, you can guess from the name itself, is its incredible venue. The party is on top of a coastal cliff overlooking the Mediterranean sea. It’s also a walking distance from the ancient Spanish streets. So, you can the best of both worlds with beach and city life!

Do let us know what you find most stunning about Fort Festival’s venue!

This festival is all about displaying the beauty of Liberpool. As Seven Streets co-founder David Lloyd puts it, “Liverpool, I guess like most cities, has its own biorhythms. Sometimes we’re up, sometimes we’re down. We’re definitely on the upswing now.”

Providing the music for their 2018 edition happening October 13, Liverpool Disco Festival’s lineup includes Evelyn ‘Champagne’ King and Crazy P Soundsystem live, while the DJs include Joe Claussell, Danny Kravit, and Horse Meat Disco to name a few! Check out their website for all of the names! http://www.liverpooldiscofestival.com/line-up.html

Fans are not afraid to share how much they love the event, John Lindsay saying, “I can only describe Liverpool Disco Festival as a huge house party where at the start you know a few folk, but at the end you know everyone!” Lisa Fletcher supports that, sharing, “Fantastic night. I want to say thank you to all the people who attended Liverpool Disco Festival for restoring my faith in clubbing/festivals – you were the nicest people, so so friendly!”

In honor of the disco event, let us know your favorite disco song!

Festival Tatacoa is happening on October 13 at Villa Vieja-Huila. It’s an electronic festival in the middle of the Tatacoa desert! They want their guests to dance 20 hours straight as they’re surrounded by the beautiful wild nature of the country. Some of the names you can dance to include Adriana Lopez, DJ Ame, Dax J, Dixon, Delta Funktionen, and so many more! Check out their facebook event to learn more! https://www.facebook.com/festivaltatacoa/

In honor of this festival happening in the desert, let us know how you like to say goodbye to the summer season!

Which of those four festivals will you definitely be attending? Please do let us know all of your thoughts through our Facebook, Instagram and Twitter! We’ll also be bringing a ton more festivals happening at the end of the year, so you can keep updated through our website on www.www.clubbingtv.com. 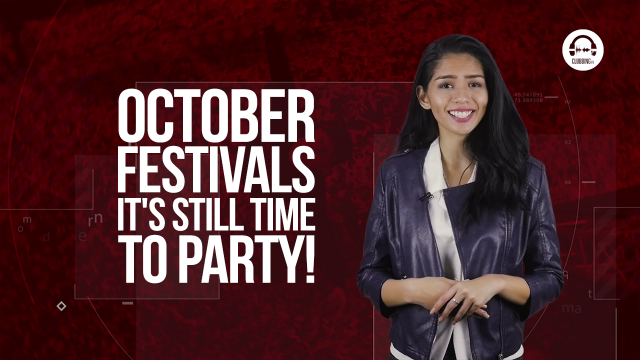