Discover the new artists of the AIRBEAT ONE Festival 2022!

In July 2022, the German AIRBEAT ONE Festival will present over 30 artists from the DJ Mag Top 100, one of the most prestigious ranking! 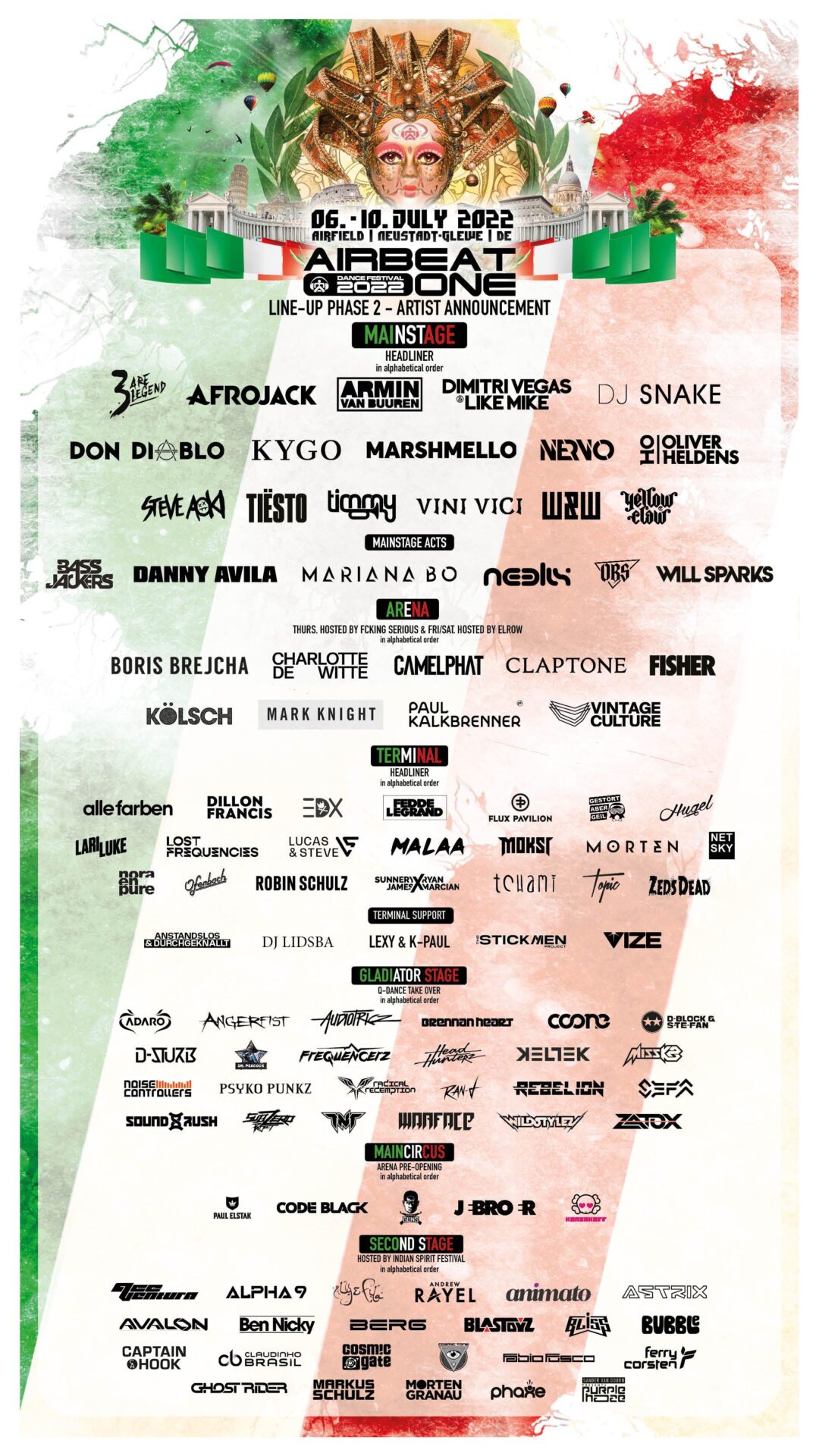 Over 30 artists from the DJ Mag Top 100 will be showcasing at the AIRBEAT ONE Festival !

The anticipation for “Bella Italia” in Mecklenburg-Vorpommern is growing day by day. From 06 – 10 July 2022, the Neustadt-Glewe airfield will be transformed into an Italian festival village. For the 19th edition of the AIRBEAT ONE Festival, the colors and the gigantic pyro show will shine in green, white and red. A true firework of DJ superstars also delivers the Line Up Phase 2 of Northern Germany’s largest electronic music festival, which is now announced.

In 2022, the new techno arena will finally be inaugurated at the 19th AIRBEAT ONE Festival, the Arena Stage! And for this premiere two sensational stage hosts could be arranged. On Thursday, Boris Brejcha and his “fckng serious brand” will take the reins. On Friday and Saturday it will be colorful and extravagant. With elrow the probably most famous, most colorful and most bizzare Spanish Electro-Dance party export presents itself in Neustadt-Glewe. With Charlotte de Witte, Claptone and Fisher, three Top 100 DJs are also at the start here. Kölsch, Mark Knight and Vintage Culture join the already announced elrow artists around Camelphat and Paul Kalkbrenner in Line Up Phase 2.

The Terminal Stage will also feature some of the stars of the DJ Mag ranking, including Fedde Le Grand, the Dutch house DJ, Lost Frequencies the renowned Belgian DJ and producer, MORTEN, the famous Danish DJ, Nora en pure, the Swiss house DJ and producer and more!

Hardstyle fans can also rejoice, as the takeover of global hard music player Q-dance has already been announced. With Angerfist, Brennan Heart and Miss K8 three acts of the Top 100 were already fixed.

A new reputation also surrounds the Second Stage. It will be dedicated to the Indian Spirit Festival, thus opening its arms to and welcoming a whole new breed of artists.

You can grab your tickets right HERE!