Much to our delight, Dream Nation Festival is maintained this year, for an even more memorable edition, with a crazy program! 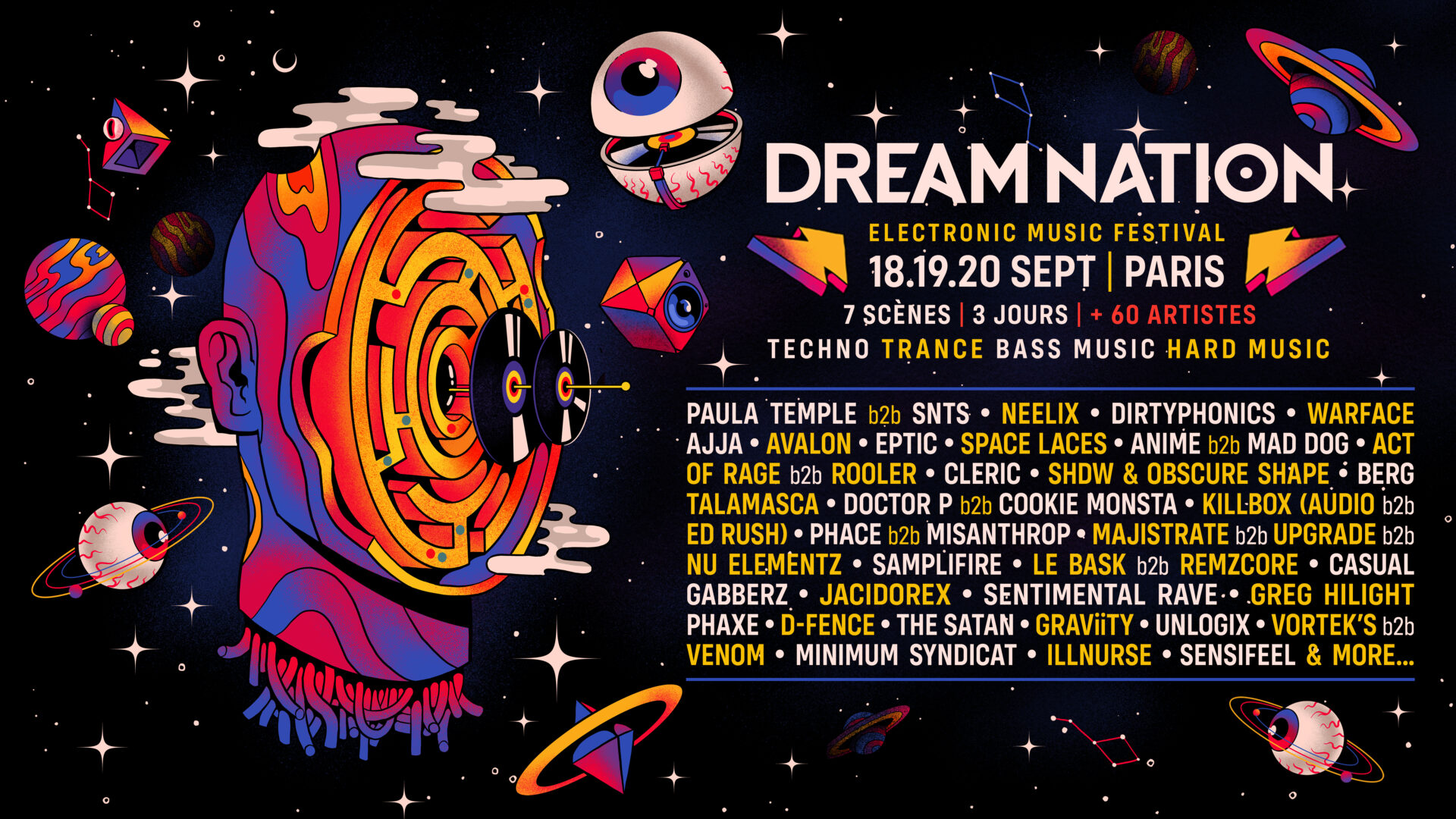 Dream Nation Festival, real showcase for the electronic scene in France, will take place soon. From 18 to 20 September 2020, in Paris, more than 60 artists will perform and make this edition incredible! Plus, 7 scenes will be held, as well as a lasershow, fireshow, and a 3D video.

Since 2014, Dream Nation aims to bring together thousands of festival-goers to dance and dream. From Techno to Acid, Dubstep to Drum&Bass, Progressive to Trance, and Hardstyle to Hardcore, this is one of the most eclectic french festival.

For the 7th edition, the Opening (on Friday, September 18th), will take place in a new venue, the Nexus, a vast reinvented warehouse with 360° immersive video mapping. The spearheads of the French Trance scene will be there such as the legend of Talamasca, the Psytrance legend, Greg Hilight from the famous band Hilight Tribe or the Trance alien artist, Graviity. This hypnotic journey will be a perfect introduction to what’s coming next!

Then, the Main Event (on Saturday 19, September) will be divided into 5 scenes. These will be in the Docks de Paris, the mythical industrial warehouses classified as national cultural heritage. Thus, a wide range of electronic music styles will be represented.

The Techno scene will bring together big names, with a new and exclusive show in Paris, the hybrid alliance of Paula Temple and the masked phenomenon Snts. In addition, other emblematic figures of the international Techno scene will perform. Among them, SHDW & Obscure Shape and the mysterious Cleric.

The Trance stage will transport the crowds with great artists. Among them, the icon of the Progressive Trance scene, Neelix, and Ajja, the Psytrance legend. Other fundamental main actors will also be present: the unavoidable Berg, the king of Full-On, Avalon, and the Trance Beethoven, Phaxe. These titans will be assisted by the French tornado Unlogix and the activist Sensifeel.

The Dubstep/Drum’n’Bass arena will bring together many talents. First, the French duo of Bass Music, Dirtyphonics, then the pioneer Space Laces. Without forgetting Eptic, or the young prodigy Samplifire. Participants will have the chance to attend unique B2B events in France, with for example, the one with Doctor P and Cookie Monsta, and many others. Similarly, Ed Rush and Audio will combine their talents in the devastating Killbox project.

As for the Hardstyle/Hardcore scene, it will also be marked by exclusives and unreleased duets. Mad Dog and Anime will face off in a powerful duel, as will the two geniuses of Raw Hardstyle, Act of Rage and Rooler. The French movement will be represented by fights between Le Bask and Remzcore, or those of the new generation Tribecore Vortek’s and Venom. This stage will also host the undisputed master of Dutch Hardstyle Warface, the mysterious masked heroes D-Fence and The Satan, and the turbulent Parisian crew Casual Gabberz.

The Seth collective will take control of the Outdoor scene, with a line-up composed of Acid Techno and Industrial discoveries.

For the Closing (on Sunday 20 September), the activist collectives Techno Newtrack and Pwfm will extend the party during the After, at Glazart Beach, in Paris. The most valiant partygoers will close this electronic weekend in style!

If you wanna have fun and enjoy this memorable experience, click here to buy your ticket.

Lovefest festival in Serbia is back with good news!

The crazy Farmfest’s line-up for July 2021 is out!