What Happened in the Sky?

World Club Dome Zero Gravity, also known as “The Party in the sky” became the first club even in history to be hosted in weightlessness. 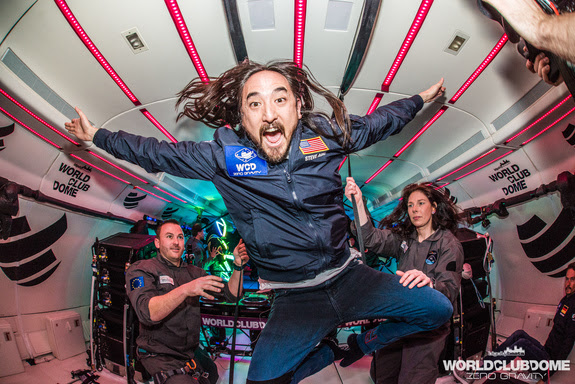 There’s one event I’ve continuously talked about that has finally happened! The dance party scene has reached new heights – literally!

World Club Dome Zero Gravity, also known as “The Party in the sky” became the first club even in history to be hosted in weightlessness. The flight was the official pre-party to the “Hollywood edition” of BigCityBeats’ World Club Done happening in June!

What happened? A Zero-G Airbuss used for training by the European Space Agency invited international DJs like Steve Aoki and W&W to throw the sickest celebration for over 50 people, which included winners from Australia, Brazil, Korea, India, and Germany! They all flew on a 90-minute flight for a zero gravity dance rave! To be invited to this exclusive party, everyone was welcomed to send in a 20-second video to tell the organizers why they deserve to be there!

At the press conference after, Steve Aoki expressed his experience, “When I got the call from BigCityBeats asking me if I wanted to be part of the Zero Gravity event I jumped at the chance. Only BigCityBeats could come up with something like that. And now I feel like an astronaut.”

I know you’re dying to actually see the party, so here are the highlights! https://www.youtube.com/watch?v=txNh6854Bps&feature=youtu.be

Why don’t you let us know why you think you deserve to be on the next World Club Dome Zero Gravity!

BigCityBeats and the European Space Agency expand their cooperation!