In the first two decades of the 21st century, few have controlled the cultural weather quite like Stephen and David Dewaele.

The Dewaeles are familiar to millions as 2manydjs, a project which undoubtedly moved the needle for modern DJing. In 2002, after a string of creative broadcasts on radio while still known primarily as a rock band, they released As Heard on Radio Soulwax Pt.2 [AHORS].

This was a mix so giddy, creative, genre-blurring and downright fun that it could only be considered equal to a full-length album — which is exactly what happened, tallying Album of the Year and Album of the Decade accolades from the likes of The New York Times, Spin, The Face, Pitchfork and more, and shifting over half a million copies globally.

In late 2022, AHORS will also receive the deluxe reissue treatment, with Richard Young’s iconic original photography restored from the depths of legal trouble (thanks to a certain someone for allowing it). And for the first time ever, this groundbreaking mix will soon be made available on streaming platforms. The liberation of a piece of electronic music history to DSPs is sure to spark a new generation of fans.

To ring in the 20th anniversary celebrations of AHORS, a date in London on Saturday December 17th at O2 Academy Brixton has been announced and will go on sale on Friday October 7th. 2manydjs will perform alongside Charlotte Adigéry & Bolis Pupul, Kittin and other 2002-specific special guests to be announced. AHORS will get an as-yet-top secret resurrection for part of the night, and who knows? Paving the way for something brand new in 2023…

The Belgian brothers-in-arms are also known to many as electronic / indie rock band Soulwax, the adored group whose combination of rock, rave, grot and gleaming white suits has proved irresistible to record buyers and festival-goers from the 1990s to the present day, and whose wildfire global tour supporting Any Minute Now / Nite Versions in the mid-2000s was canonised in cult documentary Part Of The Weekend Never Dies.

Through their Ghent-based studio and record label DEEWEE, the Dewaeles continue to push cutting-edge electronic music, including the aforementioned Charlotte Adigéry & Bolis Pupul’s infectious Topical Dancer, one of 2022’s most celebrated electronic-pop LPs.

They have also kept up a hot streak as remixers, applying their signature jagged-yet-refined electro touch to the likes of Róisín Murphy, Peggy Gou, Robyn, Sylvester, Fontaines D.C., Wet Leg, and Marie Davidson. Despacio, the roving audiophile soundsystem which the Dewaeles undertake alongside LCD Soundsystem’s James Murphy, completes the picture.

Alongside like-minded allies such as Erol Alkan, Tiga and Jacques lu Cont, 2manydjs swept dancefloors into delirium, gifting a rock ‘n roll attitude to club culture. With AHORS as their genre-blurring calling card, the Dewaele’s unique style managed to be deeply credible and hugely scalable, propelling the brothers to dance music’s summit, a vantage point from which they never came back down.

Audiovisual tours and online projects kept fans rapt, as the extent of the Dewaele’s musical curiosity continued to fan out in fresh directions. No surprise that fellow gamechangers David Bowie, Kevin Shields and Arthur Baker all became fast fans.

Their long-awaited DSPs drop and 20th anniversary party in London will rubber-stamp over two decades’ worth of work. As ever, it’s Stephen and David Dewaele connecting the past, present and future like no-one else; as they say, “doing it the hard way since 2002.” 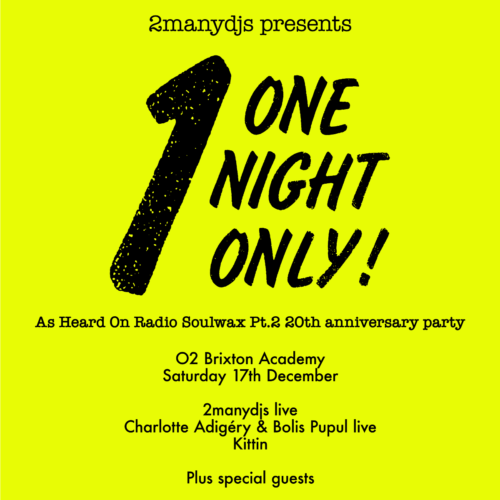