The closing party of Amnesia Ibiza will be for the books! Jamie Jones, Mar-T, Deborah De Luca, Marco Faraone and many more are already announced! 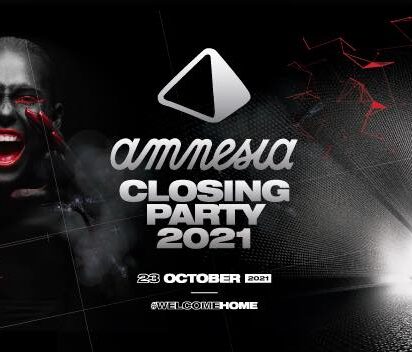 The world’s most famous club today serves up real hope with full details of the iconic Amnesia Closing Party on October 23rd.

If you cannot make that one, do not worry, Amnesia continues to work backwards on its season for more parties during the summer.

This sure-to-be legendary closing party will open at 4pm and run until 12pm the next day with four rooms. One of those is the all-new 3rd Dimension space which will have its own special vibe thanks to classy house, techno, electro and plenty in between from cultured selectors JJayda G, Young Marco and John Woods.

The Terraza will start on Amnesia classics sounds with Balearic pioneer Alfredo joined by Jeremy Healy, Alex P and Jason Bye. At sunset, Jamie Jones and The Blessed Madonna will take over to be followed by Richy Ahmed, Cuartero, Mar-T & Caal, Sidney Charles & Seb Zito and Luca Donzelli.

This is set to become another historic night in the ongoing story of Amnesia, so make sure you are there… #welcomehome and get your tickets HERE !