Here are the winners of the ‘Sunlight’ remix contest !

DJ Sammy 's famous track 'Sunlight' has 3 incredible remixes ! The winners are Digital Rockers, Kai Sheen and Sven J. Remixes are out on My Clubroom label. 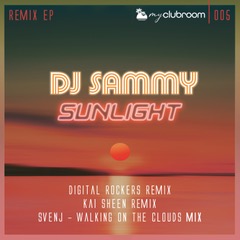 For the 2020 version of “Sunlight”, DJ Sammy was looking for young talents to remix the track. Over 50 aspiring producers took part and mostly delivered great interpretations of his hit!

DJ Sammy is one of the most famous DJs and producers worldwide. With over 20 million records sold and countless awards, the Mallorcan global player is one of the world’s most successful electronic music artists.

The Mallorcan star DJ and employees of his MyClubroom label have determined the 3 winners after intensive listening.

Kai Sheen came in second with his version. Kai Krumbach alias Kai Sheen from Mainz first came into contact with techno and house music in the 1990s. He remixes many tracks by national and international artists and achieves high placements worldwide with original songs in charts.

Third place went to Svenj with his “Walking On Clouds Mix”. Sven Carduck Gomez aka Svenj was born in Aachen, but has lived in the Spanish city of Puertollano since 1981. After starting out as a member of a rock band, he turned to electronic music.

All three versions are now being released as a Remix EP on MyClubroom Recordings! You can find it HERE!

Beatport is reviewing 2020 with its trends and winners!