On the occasion of the Dancecode agency special show, join us today, April 9th, 2020 to attend unique performances. A total of 8 artists will be there. 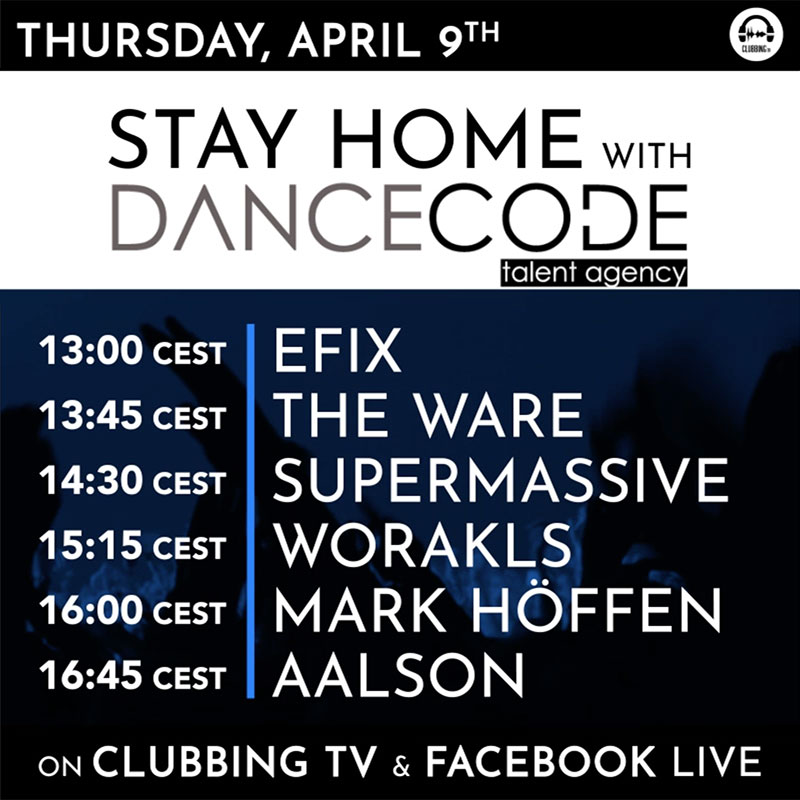 On the occasion of the Dancecode agency special show, join us today, April 9th, 2020 to attend unique performances. Indeed, a total of 8 artists will be there to allow you to escape for an afternoon. Both broadcasted on Clubbing TV and live on Facebook, this show is realized in collaboration with several partners whose names are listed at the end of this article.

As you all expect, here is the list of artists whose performances will be broadcasted during the show: at 1 pm, it will be EFIX, a 30-year-old DJ from Montpellier and known by some for street art or graphic design. It’s in 2012 that this artist made his name by winning a contest to become the official DJ of the Deezer platform. At 1:45 pm, we will listen to The Ware, born from a beautiful encounter of two compositors, also friends: Neus and Emperia. Even if they belong to very different musical universes, they decided to share their experiences and their complementary influences around this common project, to reach more people. In 2017 they released their first single, entitled “So Much”. At 2:30 pm, it will be the turn of the explosive duo Supermassive, composed of two artists from south of France: Edgar Joly, on drums, guitar and piano and Simon Albert on bass, guitar and machines. At the same time rock, pop, electronic and classical, their music has a unique style. Then, at 3:15 pm, we will have the pleasure to listen to the artist Worakls, whose real name is Kevin Rodrigues, a French singer-songwriter of electronic music. It’s in 2014 that his first EP entitled “Unity” becomes known, counting more than ninety million views. Then Mark Höffen, a DJ whose musical style is electronic, minimal, techno, will be on air at 4 pm. His motto: “It’s just about love and music…”. Finally, we will listen to Aalson, at 4.45 pm, who is passionate of electronic music and soundtracks. This young self-taught producer from Toulouse in France has developed his own techno music, which he shares only during his live shows.

So don’t wait any longer, join us to share a unique moment with unique artists >>> LIVE

Rodriguez Jr. & Booka Shade step up on remixes of Worakls!